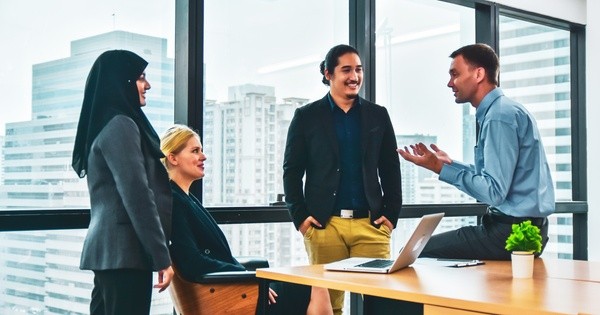 Words matter. The words we choose to say and not say signal to people what we value. When we use words that are outdated or alienating, we signal to folks that we’re not inclusive. Despite good intentions, non-inclusive language can create division.

Inclusive language makes people who have been historically marginalized feel included. These marginalized communities include — but aren’t limited to — groups who have been excluded because of their race, gender identity, sexual orientation, age, physical ability, language, immigration status and more.

Language is one of the biggest signals of culture. Inclusive cultures practice using inclusive language, which has shifted over time. Words that used to be very commonplace are now recognized as exclusionary and have been replaced with more inclusive language.

To practice inclusive language, consider understanding why it matters and learning words to use and not use.

Replacing our traditional language with a more updated inclusive language shows people are trying to be better. Rather than simply stating you want to be an ally or be more inclusive, doing the work shows you mean it. It is one small step to take on the journey of allyship. Allyship is not a self-proclamation — it is in the eye of the beholder.

When we use more inclusive language, we can lift up marginalized groups that are adversely affected by perpetuating stereotypes and unintentionally left out of conversations and workplace activities. By including people with language, we can include them in more experiences.

Performative allies say they are inclusive, active allyship is about inclusive behavior. It’s entirely possible for leaders to use inclusive language but not be active allies. Inclusive language is only a small part of what makes you an ally. While language is only one step of the bigger journey to allyship (and there is no destination), it is an important one. For allyship to be successful it must be consistent and intentional and practiced over time.

As Deloitte summarizes, “an organization cannot leverage all the benefits of an increasingly diverse workforce without an environment that is inclusive and encourages people to bring a variety of experiences, ideas and perspectives to the workplace. Creating an inclusive environment and fostering a culture of belonging requires all levels of an organization to demonstrate inclusive behaviors.”

My clients asked questions and quickly followed suit. I also noticed different types of conversations with people in my personal life. A parent of my daughter’s friend noticed my pronouns on my email signature and shared details about her family I would not have known — their son is gay. She said she felt safe sharing because she knew I was a safe place. My pronouns in my email signature built a relationship that I cherish today.

That’s the thing about inclusive language. It can help facilitate hard conversations or bring up something that might be potentially hard to surface. You still need to do the work to strive to be an ally, and inclusive language is an important step on the perpetual journey.

Inclusive language is expansive, but there are some everyday words that we all frequently use today that can unintentionally be exclusive. Consider the following list:

Words to consider using for inclusivity

How to speak more inclusively:

Make sure your language does not tokenize marginalized groups or could not be interpreted as harmful or dehumanizing. Inclusive language is a starting point for inclusive leadership. There is no end to diversity work and allyship is a lifetime commitment.